After Bruce Lee’s death the school banner was picked up in many countries of the world.

In Uzbekistan the Founder and the President of the International and Uzbekistan Federation of Jeet Kune Do is Mikhail P. Kim. 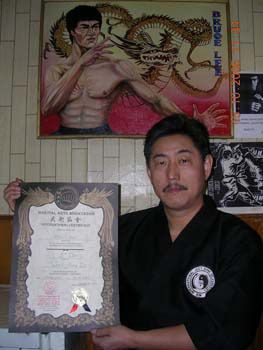 Solemn ceremony of presentation of a full package of registration documents took place in  Almalyk city. Presentation was spent by the Vice-president of IAMA Vidadi Khadjiev. Heads of the Center of martial arts of Uzbekistan, local administration, representatives of the Ministry of cultural and sports affairs of Uzbekistan and of some federations of martial arts attended the ceremony. The ceremony was organized at support of the Chairman of the Korean Cultural Center Ms. Alla T. Kim.

International Association of Martial Arts – IAMA was based in 1964 in the USA.

At present the International Association of Martial Arts is officially located and registered in accordance with the article 9 of the Principle law of the Federal Republic of Germany. IAMA is the elite international, independent organization recognized in more than 120 countries of the world. It has close relations with the imperial family of Japan, with royal family of Saudi Arabia, with various cultural and sports centers of Korea, China, Thailand. IAMA was recognized by the US president D.V.Bush and the Presidential Council on physical training of the USA as well.

In December, 2006 Federation Jeet Kune Do, headed by Michael Kim, was registered in the Ministry of Justice of the Republic of Uzbekistan and became a member the Center of Martial arts of Uzbekistan.

Michael Kim is a member of such elite organizations as: